By Shavasti on February 3, 2015 in Articles, Blog, Healing

Child of an Immigrant

For the most part we view immigration from the point of view that parents, grandparents and great-grandparents left their countries of origin in order to seek a better quality of life, more opportunities for education and financial development. However, most face hardships on arrival in their new found home. There can be challenges with learning new languages perhaps, clashes of culture, discrimination and alienation. So how does this affect our sense of having a place in the world or our sense of identity?

Immigration and emigration have been a part of human life for millennia, there is nothing new with it. In history much of the great movements of people have not been voluntary: The African Diaspora, the Jewish Pogroms and Holocaust, Armenian Genocide, Partition of India, Lebanese Civil War to name a few, and then there have been other types of diaspora that have had a great impact on both the host nation and the nation of origin: Greece, Italy, Ireland, the Philippines, India and China to name just a few. Some Diasporas are designed for profit and political gain, others as a result of war and other tragedies, and yet others based on financial need. Irrespective of where your family may be from, if you are the child or grandchild of such immigrants, you may have some unique challenges in terms of finding your identity and your sense of belonging. Some of the challenges associated with this can be amplified if your heritage is bi-national, bi-cultural or bi-racial.

How then do we balance acknowledging and honouring our ancestral roots whilst at the same time allow ourselves to fully belong to the nation into which we were born? How do we strike a balance between over identifying with our cultural roots from the ‘home country’ whilst not living in denial of our origins?

This balance is struck when we simply face whatever it was that brought our fate to the new nation. Our fate is tied up in history and fate is the ‘package’ with which we are born. This ‘package’ of fate is made up of: gender, ethnicity, nationality, religion, orientation and major childhood events. Our destiny is created from the honing and transformation of our fate into something through which our magnificence manifest.

If our families left the home country owing to war, political upheaval, poverty or tragedy it can be a challenge to respect, allow and accept that history. However, it is that very history, no matter the suffering, no matter the atrocity, cruelty or injustice that has given the very fate and possible destiny that we now enjoy. When we stand back and say ‘THAT should never have happened!’ then we are rejecting the wheel of fate that delivered our very life in its current form. It really is as simple as that.

So many become afraid that if they accept a difficult fate that befell their family that it may mean that they either don’t care or even condone the actions of the possible perpetrators. What is even more frightening, is the thought that the family and ancestors are betrayed if we accept the circumstances around our family’s own personal diaspora.

In this way too, the host nation is transformed and its identity changes forever. The image of Britishness or what it meant to be an Australian, American, Canadian or Dutch was very different in 1960 or even in 1980 to what it means today in 2015. Often the images around what identifies people from these nations are highly influenced by physical appearance, cultural and religious habits. However, just as the child of immigrants has been handed a new possible destiny and is now no longer primarily identified with the ‘home country’, so too is the collective identity of the host nation the same: the wheels of fate and karma transform everything over time.

Look at what is

How then do we embrace ‘what is’ when what was is unbearable for all concerned. The simple truth of this is that when we don’t look at what is, we are more heavily burdened by it. So what if your ancestors arrived on slave ships? Escaped an invading army? Ran from genocide and ethnic cleansing? Escaped unspeakable despair in slums?

Loss is a big feature immigration just as loss is a dominant feature of humanity. It is loss that we fear most and it is the loss of others that we are most loyal to.

What would you like to say to your grandmother? In fact, which one of the following statements are you actually living, whether or not you are fully conscious of it:

‘Beloved Grandmother, I am deeply sorry for you loss and I shall feel it for you out of loyalty’

‘Beloved Father, you lost everything, so I shall not allow myself much’

‘Beloved mother, I shall hate those people out of loyalty to you’

‘Beloved parents, I shall be of the ‘homeland’ until it is resolved, meanwhile I shall take no place here among these people’

‘Beloved Grandfather, thank you for prevailing against all the odds. Your courage has given me life and a place to call home. I bow to you’

‘Beloved mother, thank you for the gifts of your people, they shall life in my heart’

Very many children and grand-children of immigrants are living on land that was taken by force. This is true for the ‘new world’ and if we go back far enough, for just about every part of the world. However, what may be impacting us today?

How does the child of European immigrants to Australia, Canada, South Africa, Argentina or the USA settle on land taken from indigenous populations? How do we balance what happened with our own ancestors with those who were ‘cleared’ in order to make room for us? When we look at this cocktail of tragedy and injustice, it can be very easy to simply not acknowledge any of it, especially when we don’t understand the impact or know our way out of it.

In reality it is the same inner movement that heals both aspects – respect for the gift that has come to you through the suffering of others.

All of history has been marked by great upheavals within populations and between nations. Each of us, no matter where we are from, are living a life that was formed the difficult and challenging fates of our forefathers. Perhaps our Grandfather’s first wife died in childbirth and we are the descendent of his second wife. If we wish to wipe away that event, then we disappear. Perhaps our ancestors escaped a pogrom, so now we are no longer who we are today if that should not have happened? The fate of previous generations creates new destinies for their descendants. When we learn not to argue with fate and embrace the new reality of what is we can both thrive AND bow with respect to those who came before us.

Our families have often taken long and arduous journeys, often giving up or losing everything they had and everyone they loved. They want us to thrive and as we embrace their sacrifices with respect, not wanting to change a single part of it, we thrive in honour of them. What did they lose in order to give you the life you have? What honours them is to thrive in the new land whilst respecting the sacrifices made in the old land. Even if they did not leave owing to great tragedy or war, they left behind a way of life and people they loved. Some of them left a country on their own at a very young age, never to see their parents or siblings again. Are you able to say ‘Father, please bless me if I have the courage to have more than you?’ 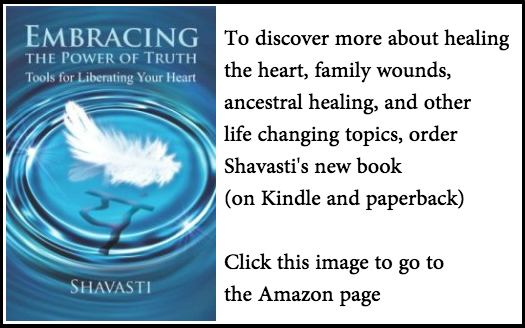 To Whom Do You Belong
Ancestral Cords

One Response to Child of an Immigrant