As a child of the 60’s and a teenager of 70’s I had an acute awareness that being gay was neither welcomed not wanted and in fact, it was quite dangerous. Not only were there taunts in the schoolyard for being a sissy, Nancy boy or in British parlance a ‘pooftah’, but the very thought of telling one’s parents was enough to fill a teenager with absolute dread, fear, terror and shame.

There was much confusion. How could it be so wrong if it was just how I was? Knowing very keenly at the young age of eight that I wanted to marry a boy when I grew up was as natural to me as taking my next breath. At that age I could not understand that if others boys didn’t choose to like girls, they simply did, it was their nature, then why was my nature then seen as a bad, evil or even a sick choice? There was no choosing, it was simply me from as early as I remember. Even well-meaning therapists questioned whether my experiences of childhood violence and sexual abuse had ‘turned me gay’. Why do they do that? No one tells a girl who has been abused by a man that she’s straight because of it? Very often if you’re gay and have been sexually abused, they try to tell you that if a woman was the perpetrator then it turned you off women for life and if a man did it, then it ‘made you gay’. Somewhere along the line, even the so called ‘well meaning’ healers were still looking for the ‘illness’ within my sexual orientation. This was back then.

In the past month two historic events have taken place, both of which have caused me to well up with tears. A traditionally conservative Catholic nation, Ireland, went to the polls and overwhelmingly voted in favour of Same Sex Marriage, voting for equality for all. This was truly a moving moment for me as it was not lawmakers, it was not some politician wanting to earn his ‘cool and liberal’ credibility image, but it was real people, real every day Irish people who voted – some of whom got onto boats and planes in order to go home and vote ‘Yes’. In the greater scheme of things it was also the Irish saying no to centuries of abuse and atrocity at the hands of the Catholic Church. However, for me it was deeply personal and it touched my heart until I could do nothing else but weep with joy – allowing some more of the pain of the 60’s and 70’s childhood rise up to the surface to be healed by the rainbow. To have a population saying yes to what I had dreamt of as a little boy was greatly healing, it was a blessing. And so we come to today, 27th June 2015, as I awake to the news that one of the world’s largest and most influential democracies has just allowed equality under law to all of its citizens, Gay and Straight alike. The world is a different world as of today. 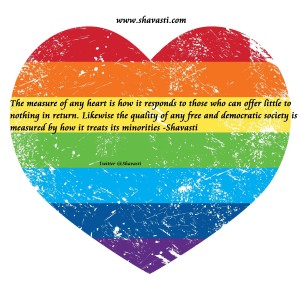 A population that has graced us with creativity, has kept the world’s airlines running, has excelled in music, fashion, cuisine and dare I say hairdressing, film, television, theatre and all manner of creative self-expression, bringing rainbow colours to a world that can be very grey without the gay has finally been given permission to just be a part of the world in equality. However, let it be said this equality is not a ‘right’ that needs to be bestowed upon us by a straight population – our right to exist and to be as we are is inalienable simply because we do exist and we will continue to exist as your children, your brothers, your sisters, uncles, aunts, best friends, colleagues, accountants, nurses, doctors, healers, bricklayers, soldiers, police and architects.

Back in the 1970’s and 80’s on telling parents that you were gay it also meant telling them that you will never get married, never have a family and never have children. This, thankfully, is no longer true in increasing parts of our still very troubled globe.

If you are straight and reading this, then why is the day of the Healing Rainbow important to you to? It is important to every man and woman on this planet as it is a major milestone in the eradication of discrimination and it is another inroad into the healing of misogyny. For centuries women have been taught to hate and distrust their bodies and much self-hatred has been suffered by the feminine. Historical lies and images have survived to this day, the classic one of Mary Magdalene being a repentant whore, which is neither scripturally nor historically accurate. It is time for the Western Christian dominated world to cast off the shackles institutionalised self-hatred imposed on us through more than fifty generations of church doctrine that has infected each and every one of us like an insidious virus as we came into this world – passed onto us like a baton in a relay race. This monumental precedent for the liberation of gay and lesbian people across much of the democratic world is of great importance to the straight population – as each group is liberated from oppression, then each of us is likewise released just a little more from our own self-imposed suppression and imprisonment. It means that we live in a world in which there is more opportunity for each to be seen as they are and not for what church, politics and tradition forces us to see in the child. It means that heterosexual boys and girls have greater freedom to explore who they are as individual fountains of expression and creativity instead of simply acquiescing to innumerable images placed upon them at birth. It means that heterosexual boys and girls are freer to discover the truth of who they are with fewer images of what it is to be ‘good’ to chase. Freedom for one is freedom for all.

As human beings what we long for the most is connection. Connection to one another and connection to our very own heart. As each disconnected group and individual is ‘brought home’ to the greater unity of the human family we can all give a sigh of relief as our own connection to all of life is affirmed. Whether you are straight, gay or bi-sexual, love is what binds us all together. Wars, religion, ethnic and political strife have torn us apart for generations and have kept us separate from what we truly long for. The days of calling ourselves ‘good’ through loyalty to an ideology are waning and what is being ushered in is an era in which the experience of our very own heart is what informs us of our goodness. The measure of any heart is how it responds to those who can offer little to nothing in return. Likewise the quality of any free and democratic society is measured by how it treats its minorities. A healthy democracy in not one in which the majority can exclude minorities from the rights and privileges of the majority. It is a great pity that the gay and lesbian population of the world needed to ask for permission to exist. Let this not befall anyone else ever again.

Why do women betray one another?
Men and Infidelity